Assemblo recently attended a presentation about how virtual reality (VR) and augmented reality (AR) are creating new opportunities for content marketing and storytelling.

The event was part of Firebrand Talent’s #digitalks series and presented by Venessa Paech, Community Engagement Manager at Australia Post.

Paech explored how VR and AR are infiltrating all industries, from tourism to medicine, not-for-profit charities and retail, and being used in a range of creative ways, including training, education, storytelling and entertainment.

What is virtual and augmented reality?

Virtual reality refers to the technologies and content that work together to simulate another reality.

It generally involves computer imagery that wraps around the user in a 360-degree environment, and sometimes contains elements that can be physically interacted with.

Augmented reality refers more specifically to technologies that combine the actual reality of a user, usually captured through a camera, and overlays information, graphics and interactive elements to enhance the user experience in some way.

A powerful example of AR is the Pokémon Go game, which placed virtual Pokémon in the real world through the use of a smartphone app.

The overwhelming popularity of the game, which gained seven million users in its first seven days, has plateaued but it remains a testament to the power and possibilities of these emergent technologies.

The six dimensions of VR storytelling

Based on its current technical capabilities, there are six ways that VR can engage users, according to Paech. These can be combined to make the experience more immersive. 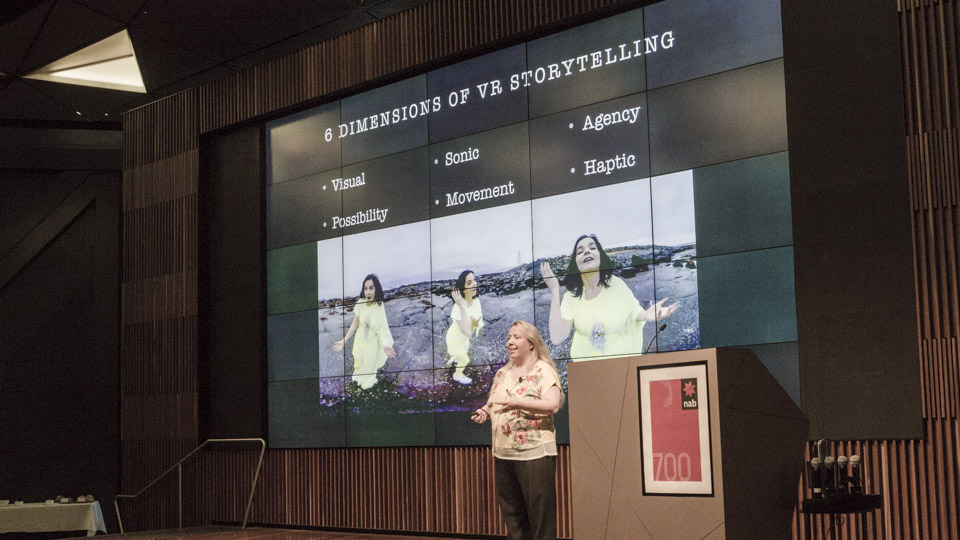 Why jump on the VR and AR bandwagon?

It was interesting to realise that the main appeal of VR is its promise of escape. It provides a way for us, for a short time, to put aside a world that can be confusing, stressful or disappointing, and enter into another world, be it playful, calming, exhilarating, informative or emotionally engaging.

It’s the emotional power of immersive environments that has led to a growing number of organisations adopting these technologies as a marketing tool.

A compelling example is Audi’s virtual test drive, which allows you to get the feeling of driving one of the German car manufacturer’s luxury offerings without leaving your couch. This virtual reality experience is accessible by anyone with a smartphone connected to YouTube and a virtual reality headset, like the Oculus Rift or the slightly more affordable Google Cardboard.

Combined with their very popular ‘virtual showrooms’, Audi has seen noticeable increases in sales without the added cost and hassle of purchasing huge amounts of floor space in major cities like London, Beijing, Berlin and Istanbul, where real estate is at a premium.

It’s obvious that virtual reality is on its way to becoming mainstream, with Facebook purchasing VR leader Oculus for US $2 billion in 2014.

The digital giant has already begun work towards a future where Facebook is transformed from a 2D social networking platform to a fully immersive interactive virtual environment.

This, paired with Facebook’s foray into the augmented reality space, the Camera Effects Platform, means that the VR and AR presence will increase, which will inevitably mean that the cost of implementation and consumption will decrease.

The experience of virtual reality is still very fresh and practitioners, communicators and users are still learning its language.

At the same time, the technology that drives the experience has advanced dramatically over the past few years.

Paech said this is why now is the perfect time to experiment with this medium.

Getting started with virtual and augmented reality

Paech recommends the following three key stages to leverage the power of VR and AR to help your business:

It might be a good idea to start with the familiar: take existing marketing strategies and add the immersive and interactivity elements that virtual reality offers.

Things like branded entertainment, events and exhibitions, product demos or training can be enhanced through the power of immersive storytelling.